The Story Of My Work - Roi James Studio
Skip to content

The Story Of My Work 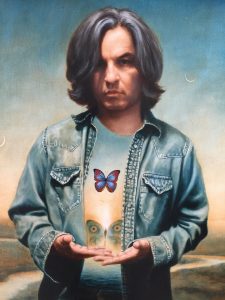 I was 28 when I realized I wanted to become a painter. Until then and to this day, I had never studied art nor had any formal training. I’d always had the “gift” and recall my kindergarten teacher showing my mother my drawings and expressing how advanced they were for my age. But art was not a realistic occupation as I’d been indoctrinated into the “tragic artist” mythology, that to become one was to lead a sad and ultimately unfortunate life. So quite by accident, at 28, I attended a life drawing class and within the first 30 seconds of the first drawing, in the most supernatural way, I was was transformed. It would be another seven years before I had my first gallery show. Between then I poured over books of the techniques of the old masters and immersed myself in tens of thousands of images, slowly developing a rich visual vocabulary. I became enamored with the painters Titian, Vermeer, Caravaggio, Rembrandt, among others and with the romantic landscapes of Claude Lorrain, J.M.W. Turner, and Caspar David Friedrich. It was the majestic beauty and drama in these artist’s paintings and the long tradition of disciplined study and technique that attracted and inspired me. It would become the holy grail of what I would hope to find in my own work. And so my early paintings were infused with the dramatic play of light on human bodies and landscapes.

I achieved a degree of success with this early work which in 1998, allowed me to quit my full-time job as a graphic designer at Dell Computer and focus entirely on painting. Though I continued to work in the traditional style of layered glazing in oils, I was already feeling a pull away from convention and a desire to explore painting’s greater possibilities. Where it had been a hunger for tradition and discipline that established my foundation, I was now compelled by a meditative thoughtfulness in being present and a desire to release myself into the uncertain world of abstract and conceptual painting. This began a ten year transition away from one style and method and into the new. However, my interest in form and beauty never wavered. Even the method of applying layered glazes continued to instruct my new work, though from a very unique and self invented process. My new paintings are spontaneous and abandoned Meditations, appearing as quiet spaces or joyful dances on the canvas. My Constructs are architectural explorations of color and surface, simultaneously both painting and sculptural relief. Fundamentally, despite their dissimilar surfaces and the contrast to my earlier romantic period, this new work remains true to my commitment to beauty and form.